Billy, a homeless man who’s fallen from the Tree of Life, receives an invitation to a mansion in Newport and is asked to tell Phil, a wealthy ex-agent, a bewildering tale involving a mysterious woman known only as The Whiskey Maiden. But Billy, attempting to hold onto the philosophies that he learned from the mythological woman, has forgotten the story itself. It takes an encounter with a 100-year-old prisoner within the attic to remind him how the events transpired…and what he is truly there to do. Forced to confront a fissure within his own narrative, Billy’s reality begins to deconstruct as the shadows of his past begin to creep into the present. His monastic ethics soon fracture in the face of luxury as his history becomes clearer to himself with bloody consequences. An allegorical re-fabling of the myth of freedom and the consequences of our own desires, The Whiskey Maiden will leave you questioning the cost of it all as you witness Billy try to discern what is real, what is imagine, whom he loves, and whom he may have murdered.

For more information and pre-sale tickets visit Theatre of NOTE.com 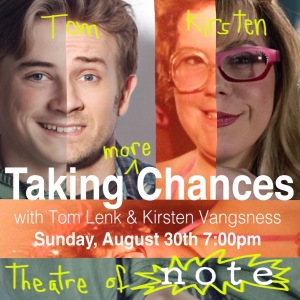 Tom Lenk (Buffy the Vampire Slayer, Cabin in the Woods, Buyer & Cellar) & Kirsten Vangsness (Criminal Minds, lots of 99 seat theatre) come to Theatre of NOTE with TAKING MORE CHANCES. The sequel to the massively popular TAKING CHANCES with Tom & Kirsten features music, spoken words & more chances taken with Tom & Kirsten than the last time they each took chances. Be a part of this intimate & funny one night only event.

The entertainment begins at 7pm, but if you arrive at 6:30pm you’ll have a chance to win a unique “Kirsten Signature Closet Clothing” item in a live auction. Have you ever wished that you could have a pair of her unicorn shoes? That may very well be possible! All proceeds will go towards supporting Theatre of NOTE’s next production, The Whiskey Maiden.

Shakespeare In The Sphere

Using Oculus Rift gaming technology, producers Erin Fleming, Tony Williams, and Inger Tudor are partnering with Neil Smith, Chief Visionary Officer at Rift Valley Studios, to immerse students in scenes from Shakespeare’s plays so they can be experienced first-hand in the world of virtual reality.

We will be filming these scenes with an amazing group of actors using a camera complete with 6 go pros stitched together on a sphere shaped stand. This is the same technology currently used with Oculus Rift.

We view the gaming world as an innovative and educational tool. By incorporating the latest advances in virtual reality, we aim to reinvent the way children learn about literary art by immersing them within the literary world itself. Our primary goal is to educate and inspire future generations in a way that has never been done before, but the possibilities are limitless. Our plan is to make this program available, not only for schools across the United States, but across the world. In order to do that, we need to complete the first episode of Shakespeare In The Sphere, a stepping stone in this artistic endeavor. We would love for you to join us as supporters of an upcoming revolutionary and educational phenomenon.

The Kickstarter goal of $8,000 will be dedicated towards filming a 9-page scene from Othello using the Oculus Rift Software. The result will serve as the pilot film of Shakespeare In The Sphere, an introductory experience that will grant teachers, schools, and countless educational organizations the opportunity to see the quality of the acting as well as understand how immersive the virtual reality experience can be. Selected to be only the first of many scenes to be developed, the Shakespeare In The Sphere production team aims to cooperate and find a means to incorporate these virtual reality works of art into the standard literature curriculum. If we manage to raise more than $8,000, those funds will be dedicated towards the creation of the additional Shakespearean Scenes.

If you are connected to an organization or an educational branch that would love to bring this revolutionary experience to a group of students, then we have an amazing offer for you. For $50,000, Neil Smith, Chief Visionary Officer at Rift Valley Studios, along with the Shakespeare In The Sphere production team will provide you with a unique and unforgettable experience. The team will attend the high school or college of your choice and conduct an in-depth educational workshop on the viability and process of virtual reality. All of the participating students will then be granted the opportunity to work alongside the production team in order to create a virtual reality film. All of the required equipment will be provided by the production team and no additional costs will be issued to the recipients. This offer is limited to high schools and colleges within the United States. The production team will be available for travel beginning February 2016.

For more information and regular updates, visit/follow us at…